In my life, every day is International Women’s Day. As the mother of three daughters, I find myself celebrating the ingenuity and contributions of women 365 days a year. At the Boll & Branch home office in Summit, NJ, our workforce is 79% female. I’m extremely proud of the empowered environment that women and men here work together to create every day.

Globally, the power of our community is even more inspiring. You may not know this, but your support has allowed us to form deep connections with some incredible, family-owned companies around the world. Today, I would like to share the story of Lakshmi, one of our friends and longtime partners without whom Boll & Branch wouldn’t be possible. Against nearly impossible odds for a woman in late 1970s India, she founded a successful weaving mill. Last year, I brought my daughters to India to meet her, because I wanted them to witness firsthand the power women have when we believe in ourselves. Today, I’m humbled to share her story with you. 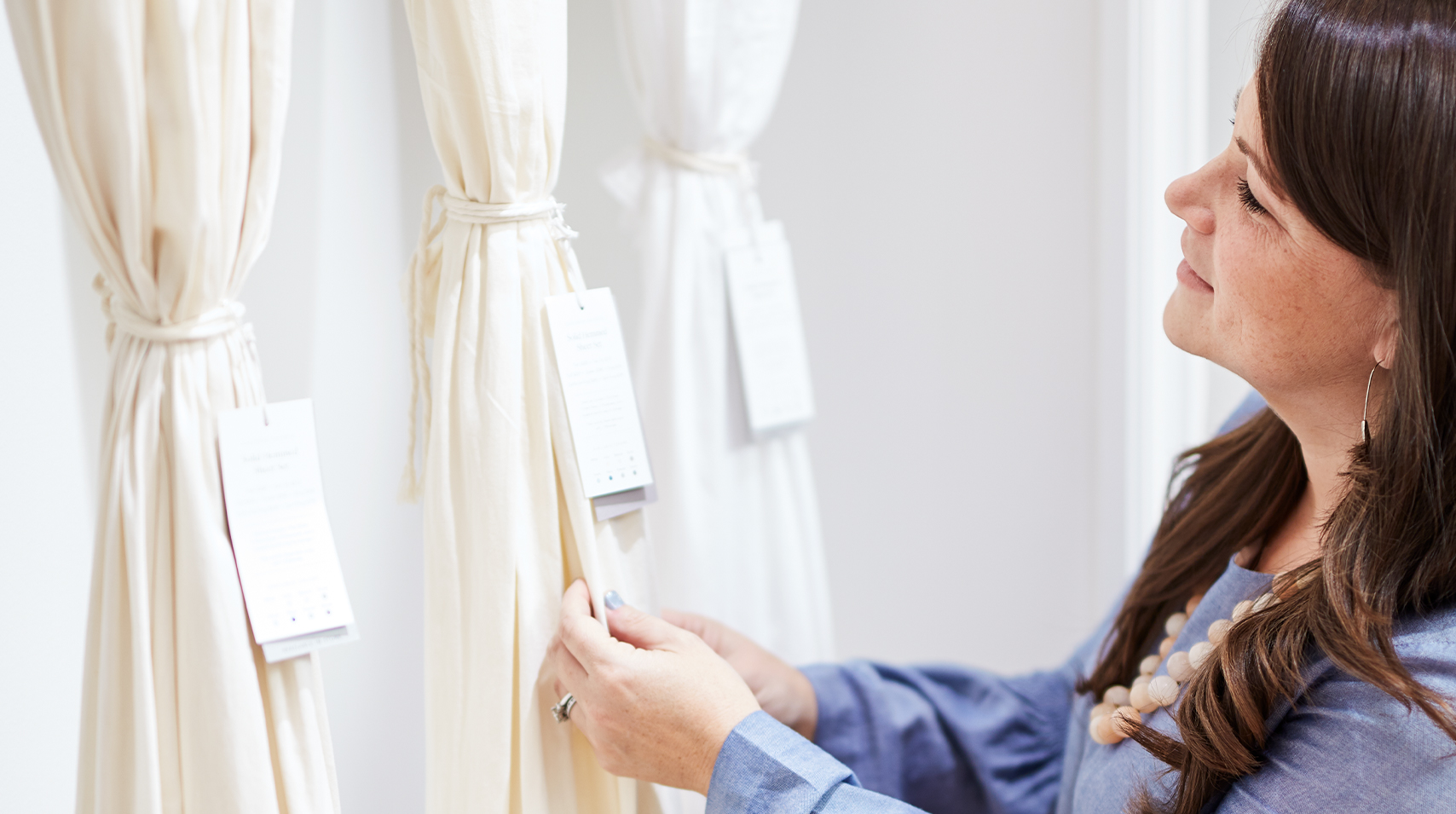 Because of your support and our commitment to Fair Trade, sustainable practices, Boll & Branch can help sustain and grow Lakshmi’s vision of a thriving, luxury textile mill where workers are treated with equality, decency and respect. Because of inroads made by women like her, there are more opportunities for women than ever before.

But we know we still have a way to go.

So, in the spirit of International Women’s Day, here’s a five-minute read that will leave you feeling uplifted, inspired, and ready to raise your own daughters to courageously meet their own challenges.

Thank you for believing in us, and for supporting missions like Lakshmi’s. 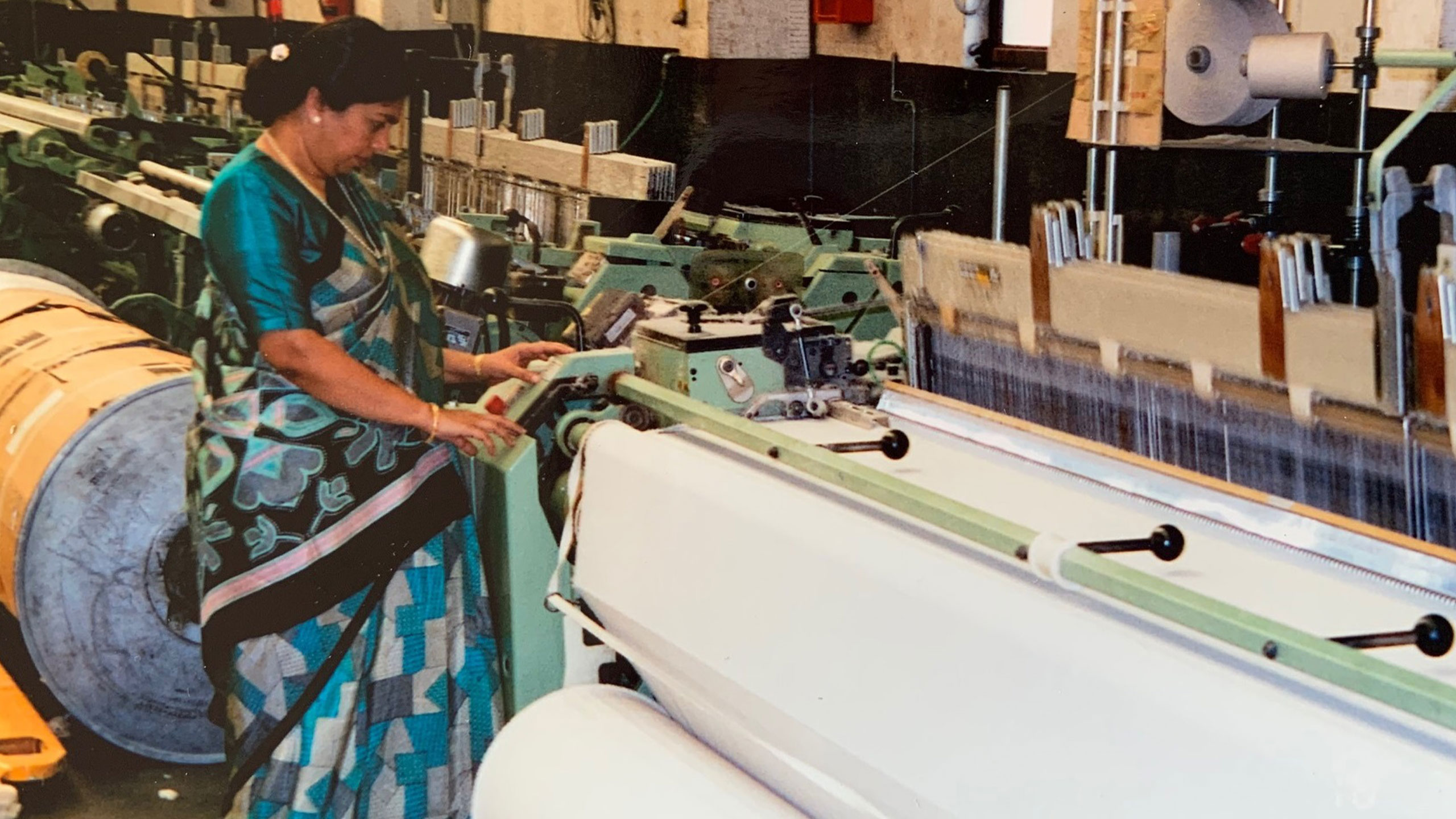 Destiny began, for me, in the late 70’s and early 80’s. I was married immediately after graduation, and was expected to be a home-maker at 19. I married into a very conservative family who were basically money lenders. Higher education for girls was considered a waste (this is all in mid-1970’s) but my own parents were very progressive thinkers, great patrons of arts and literature, with no gender bias, and they were leaders of the textile industry in the country.

I was suffering a cultural conflict. I talked to my mother, and she encouraged me to decide what I want. I was ambitious, young, and vibrant, with fiery enthusiasm. I told her I wanted to set up a small textile unit. She smiled and said “Good. Keep your dream alive. Study textiles and its ways.” Sharing the passion my family had for textiles (especially my father), I decided to build a small weaving factory, where I could start my dream. Things moved fast. We located land in an arid, remote village called Thirali, near Madurai. At that time there were no proper roads or electricity, and it was totally isolated from the busy towns. I have always been inspired by my father’s thought that we must work to generate employment and social upliftment among rural India. So, my company was born in 1979. It was a dream come true for me. I was delighted.

When you start, you start with certainty that you will succeed.

Against stiff opposition for a young woman (by that time I was 21) my mother blessed me by laying down the golden rules: stand up to fair play and justice always & never yield to temptation or give up. Always be committed to values and ethics. Honesty & integrity are more important than monetary benefits. When my journey started, I was unaware that the road ahead would be full of thorns. It was going to be a long road to success. 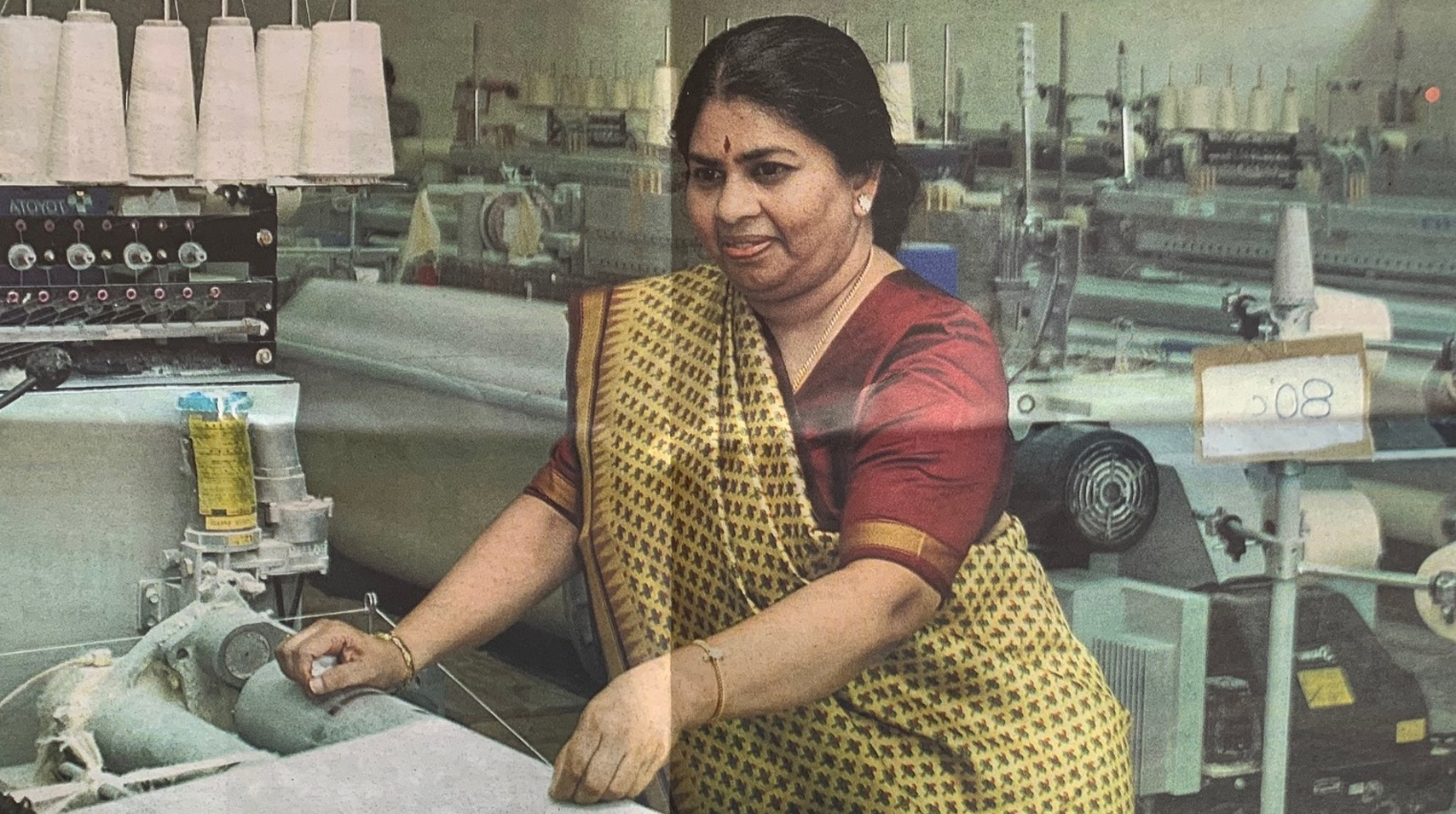 The mill had a very humble beginning, with 75 shuttle looms and 25 plain looms situated in a most backward area near Usilampatti. This is the place where, at this time, female infanticide was at its peak. 9 out of 10 baby girls were subject to this harshness within a week of their birth. Now, this was a special challenge. There were hardly any women entrepreneurs running a company on their own in 1979. But how would people accept a female boss in a place where they wouldn’t accept a female child?! When production started, we needed a trained labour force from nearby. These people were militant, raw and not open to learning, basically cattle herds who roamed with no discipline. They were arrogant male chauvinists, drunk with pride, and they would come to work very casually after their female child would be killed. Pained within, I gently started story sessions, telling them stories about feminine qualities, great Indian epics where femininity was celebrated. At first, they would mock me and walk away. I would start with 10 people and to my dismay one or none would be left. Slowly, I had to impart that only if they cooperate and put in their best to the company, the standard and quality of life would be better for everyone. It took patience and an ever-affectionate approach to turn the once-militant labourers into more understanding ones. After a long struggle, their mindset changed, and the machines started working. I still had to wait until the early 90’s to get our first female workers.

Women are, foremost, homemakers.  An Indian woman puts her family ahead of everything else. A woman’s inherent qualities of head and heart qualify her as a better manager.

Her innate compassion leads to empathy, tolerance to patience, collective calmness to increased productivity, her pliability transcends to better team dynamics and lead to vibrancy and growth. These are the natural instincts of an Indian woman, the Indian woman have always been depicted as the ever loving, sacrificing mother. Challenges have certainly changed for Indian women since the 1980’s. Now, there is no field where we don’t have a lady in India today. Empowerment of women is improving. 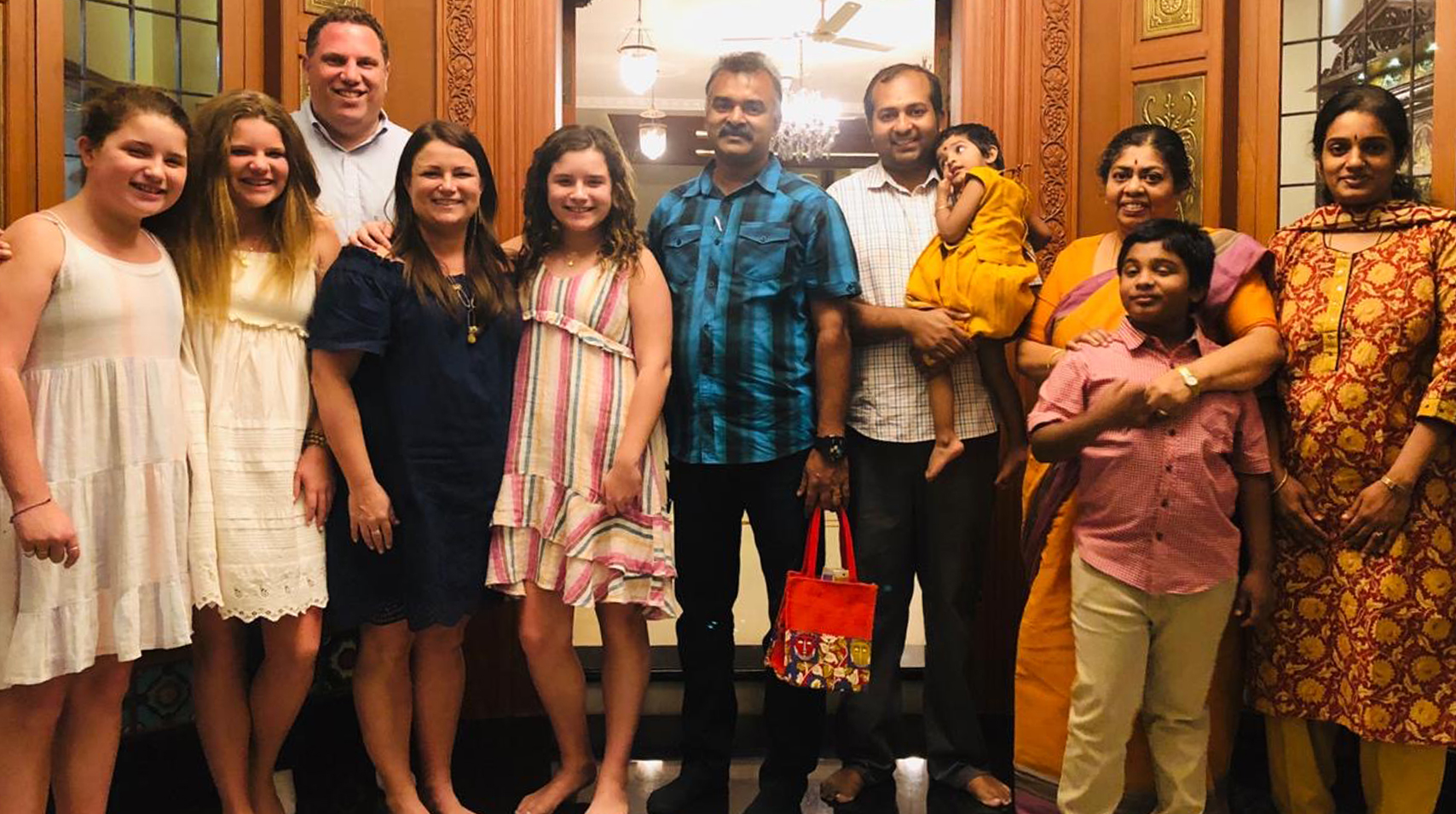 As a mother working through the whole day, I had to balance home and industry.

In fact, when I was starting out, I was a very young mother, my son Ramu was an infant, just a few months old. I used to take him to the mill everyday with his nurse and all his equipment... He learnt to walk his first step in the mill. However tired I may have been, I used to spend my time in the evenings with my kids, planning weekends, fully involved in every little kids’ activity, to the best of my ability. I wanted to make them feel they are the most important to me at all times, sit with them whenever I felt they needed me for their exams etc. It is a proud moment for me (a mother) that my son Ramu is at the helm of our company today, and that it’s become such a large unit under him. It’s truly a dream come true—we have so many female workers who are now economically empowered, no longer slaves, but partners in their families.

The endeavour of every Indian woman is not to be a competitor or to express supremacy, but to share the family burden. Today it is necessary that women also earn for their families along with their counterparts. Femininity used with dignity will not hurt. Definitely today India is one of global forerunners, now that women have made their presence felt. Indian womanhood is a beautiful synchronization of inherent natural instincts and qualities blended with the challenges of the 21st century. Also, as ambassadors of cultural inheritance, Indian women will lead the way in the century to come.

To our young entrepreneurs I would say: this is not a path of roses but if it is a passion, the journey is enjoyable, because it is a social commitment.

Patience and persistence are an essential part of your journey. Putting family first should be a necessity and priority. A balancing act of family and work should be done with consciousness and fervor.

What's inside our down feather pillows?

How we perfected percale sheets